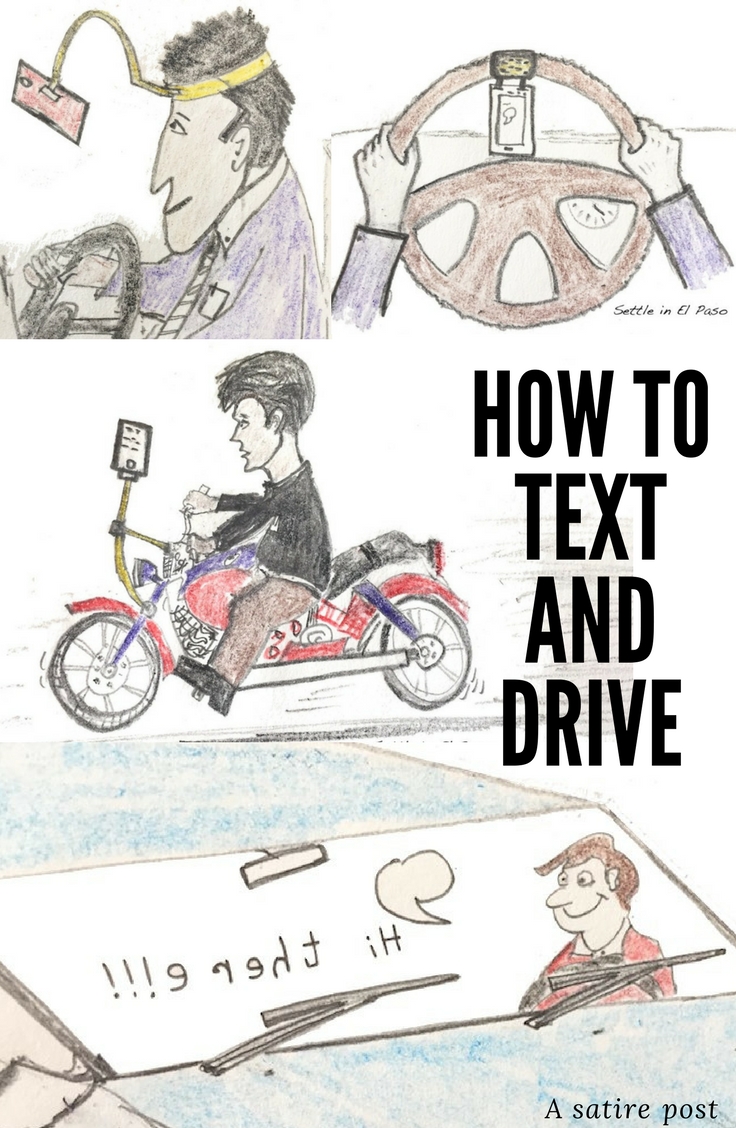 This post describes a few ways of how we, the cool tech-savvy community, may survive this disaster of texting & driving ban. All the following methods can be applied hands-free. Therefore, their use should be legal. However, we strongly suggest that users consult a lawyer before implementing these methods. The authors of this post do not guarantee any safety or legal consequences of the methods.

All the following methods have one feature in common — you will have limited capability of typing. You will only be reading your incoming text messages safely. It is strongly recommended that you pull over if you need to type a message. However, you may type a few words without pulling over if you feel that no law enforcement officer is around, but again, the risk is all yours.


Driver-head mount is a simple sophisticated device designed to attach a smartphone with the head of the driver. The phone is tightly mounted on a synthetic rubber stand, which is strongly attached to a head-band as illustrated in the figure. Although it is possible to mount tablets with this stand, we strongly recommended that only smartphones be used while driving. Tablets may increase the risk by obstructing the street-view even though we know that many people can drive fine without having a direct view of the road. It is alright to mount tablets, including iPad and Galaxy Tabs, while jogging or walking.

Cons: Users may experience headache after using the mount on their head for an extended period of time. We are sure that scientists will discover the optimal number of hours one may keep the device attached to the head without any health issues, when the device will be commercially produced.

Another drawback of this mount is that it may be difficult to type text messages while driving. The headband may become loose when typing a text message, especially when driving at a high speed.

Steering-wheel phone mount is a technology that places the phone on the steering wheel, which is the closest to where people keep their phones for traditional texting & driving. Smart steering wheel mounting keeps the street-view unobstructed. It will let the user text and drive with an ease, without any necessity of taking the arms off the wheel.

Rearview mount is a sophisticated device that may carry both cell phones and tablets. The owner will mount the gadget with the sturdy mount, which will be attached to the rearview mirror. The following sketch demonstrates this elegant solution to the texting and driving ban problem.

Cons: Inefficient texters may report difficulty in typing text messages while driving at a high speed. We are pretty sure, even such inefficient texters will admit that the mount is great in using the smartphone as a GPS.

Anyway, we cannot afford a Tesla. Therefore, we are not much worried about it at this point. Yet, we have something more innovative than the previous ideas for Tesla-like smart cars. The idea is reflected in the following figure.

One may customize the windshield of a smart car before purchasing it. The windshield will be able to display all messages and notifications from the cellphone. This is something like the sci-fi movies where there are transparent glasses on which techy texts appear and blink. A self-driving capacity with this windshield screen messenger will be a perfect millennial combination. Typing on the windshield may sound a little inconvenient at first but it is possible to write text messages without typing by using a smart phone’s voice recognition software. 🙂

Cons: This technology will be expensive. We are not sure if Tesla will be willing to make such windshields either. Elon Musk is great. He might like the idea. If you are lucky, he might even install such windshields on the spaceship for manned Mars mission.

We do not know if motorcyclists text when they drive. It sounds too risky. Anyway, our innovative ideas are not limited to regular four-wheel vehicles. The ideas cover motorcycles as well. Please take a look at the following picture that demonstrates how a motorcyclist may mount a cellphone on a two-wheeler.

The cell phone will be mounted on the front side of the motorcycle. The stands should be flexible. The motorcyclist will be able to tilt the phone to the left or to the right to keep street-views unobstructed.

Texting while driving is under no circumstances an acceptable activity. It risks the lives of others on the street who are relying on your driving skill, efficiency, and kindness.

Please notice that we have published this post under Awareness and Comedy and sarcasm categories. We observe people texting and driving almost everyday. Do you notice that many drivers are doing that? Please feel free to share any relevant experience in the comment section.