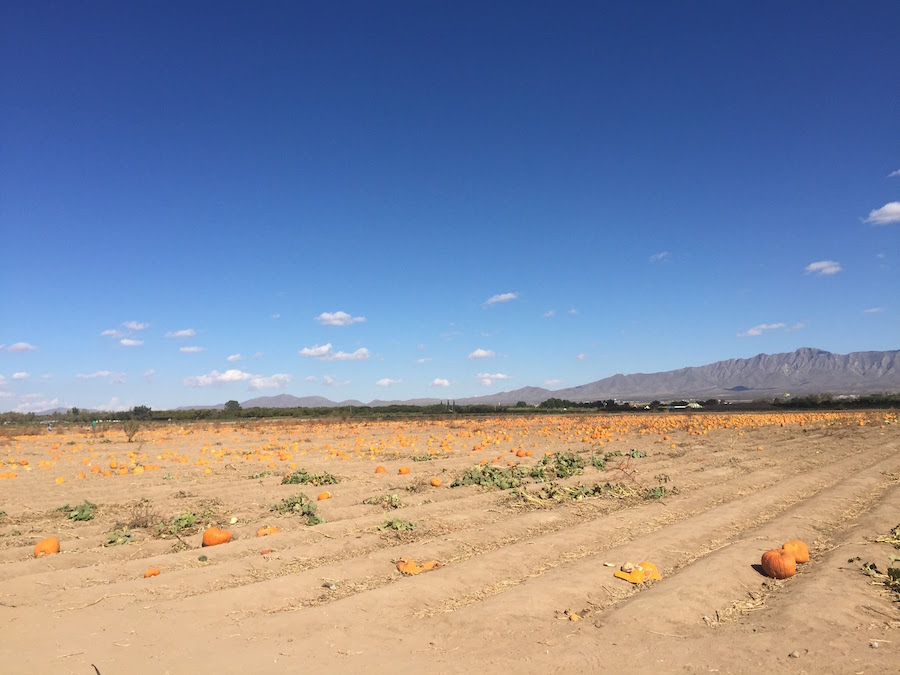 Given his age, Dear Son enjoyed no more than four pumpkin festivals so far, among which he barely remembers one. We know how much he loves the countryside drives and the visits to the front yard produce-sales of the nearby growers during the weekends. We knew that he would enjoy the pumpkin fest. Despite having hundreds of other things (please read a few other things) we could do as a family, we decided to go to the Pumpkin Fest last weekend (Sunday). The Pumpkin Fest was at the La Union Maze (1101 NM-28, Anthony, NM 88021). The place is just 20 minutes to 30 minutes away from the Westside of El Paso.

It was the last day of the pumpkin fest in this season. We made another attempt to visit La Union Maze around a month ago but we found that the place was too crowded. We decided not to enter at that time. We heard that the last weekend is the least crowded one. Dear Son would be able to participate in many of the activities without long waits. Therefore we decided. the last weekend it is.

I made sure that my phone’s photo albums are transferred to another device so that we can take more pictures. I made sure that Dear Son has taken his cowboy hat, sunscreen, and water cup. Primping Dear Son’s hair was unessential because tiptop hair-style will not survive after all the activities in the pumpkin festival. 🙂 Peeing is a must for Dear Son before we leave home on any occasion.

Dear Wife made sure that we have the trimming scissors, a bag to carry a few small pumpkins, and enough food for Dear Son. Trimming scissors may become handy if we get a chance to pick vegetables from a garden. Also, the scissors become handy in separating pumpkins from the plants and trimming pumpkin-stems. While tickets can be purchased using credit cards, paying for food and the pumpkins may require cash. Dear Wife made sure that we have around fifty dollars of cash.

Parking space was ampul on the last day of the pumpkin fest. La Union Maze has a large windmill near the parking area. The windmill proudly wears the name La Union Maze. A photo is provided below.

We paid our entrance fees: $12 per grownup and $6 for age two to five. Each of us was given a wrist-band that we had to keep on our wrists during the time in the festival. A Corn Cop checked our wrist-bands at the gate. Corn Cops are employees of the La Union Maze. All of them had “Corn Cop” written on their jackets. 🙂

Pumpkin smash was one of the most exciting events in the pumpkin festival this year. There was a long crane on top of which there was a platform where there were two or three Corn Cops. Pumpkin smash was a charm. The Corn Cops threw pumpkins from the carrier up above the crane. The large pumpkins fell down and shattered into pieces. A Corn Cop was giving commentary, “The jury reached a verdict. The pumpkins have been found guilty. …” Therefore, the pumpkins were thrown from the top of the crane. Water was injected inside the pumpkins. A small hole was made in each of the pumpkins. The pumpkins were releasing water when they were falling. A video and a picture of the pumpkin drops are given below. 🙂

There were donkeys, goats, and sheep. We remember, there were chickens last time we went there. Chickens were probably moved somewhere else. Anyway, we enjoyed feeding a few sheep. Goats were not much interested in eating from us; we do not know why. The sheep were very interested in people and the food everyone offered.

There was a coin operated animal-food vending machine. We were lucky that we were able to find a few quarters in one of the side-pockets of my backpack. Dear Son inserted the quarter, Dear Wife turned the switch, and I took the pictures. 🙂 Dear Son was not afraid of the animals. He enjoyed feeding the animals. He was giggling. 🙂

There was a large air trampoline where kids were dancing and jumping. Music was all around that place. Dear Son and Dear Wife had a lot of fun jumping. 🙂 I had fun taking pictures. There was some level of chaos on the trampoline but everyone was enjoying the rhythm. I did not get the courage to go there because all the dads seem to be waiting outside the fence. I assumed using collective/reflective social knowledge that there might be some kind of weight restriction. Anyway, one of us had to do the hard work of taking pictures. 🙂

At some point, we ate lunch. Although Dear Son ate a bowl of noodles at home before leaving, he did not refuse a hotdog and some bites on a corncob. Dear Wife had a hotdog and a corncob. I had a brisket sandwich and a corncob. We all shared a plate of spiral potato fries. All food items were purchased using cash; credits cards were not accepted. We enjoyed the lunch under a shaded area where tables and benches were placed.

Sliding was a great fun activity for kids. A few babies who barely could walk were sliding. It was great to see there faces — smiling before starting, then the face turns wide open while sliding, the smile come back when they slow down at the bottom. 🙂 Dear Son enjoyed sliding with many other kids.

Duck race does not involve real ducks. 🙂 There were some long plastic chutes, in one end of each of which there was a water pump. Kids could spend hours here. There is a lot of giggling and laughter around this place. An adult or an older kid pumps the hand-pumps. For smaller kids the fun begins after enough water is pumped to flood a chute to push the plastic ducks. The pumps are of different colors. It was hard for Dear Son to pump but he still tried. Most of the ducks were yellow but there were other colors as well.

The ride to the pumpkin field

A tractor pulled two large wagons full of passengers to give a ride to the pumpkin field. The driver warned the passengers about the iron-railings. One may get hurt during a bumpy ride. The ride was quite bumpy but the view was pretty amazing. We saw many different crop fields, some of which were cotton fields. The tractor took us near a very large pumpkin field. We stepped down from the wagon and Dear Son started to cry because the tractor was leaving. The more we tried to convince him that another tractor would come after ten minutes the more he became anxious. We were able to calm him down a bit when we walked through thousands of pumpkins. I used the trimming scissors to separate the pumpkin stems from the plants. It was very easy and convenient due to the trimming scissors. The bag helped carry the pumpkins. We were looking for pumpkins that we can use to cook as vegetables, or Dear Son can play with.

Dear Son was happy to see the tractor came back to pick us up. He was more excited about the ride than the pumpkins. The tractor dropped us in the festival area. We paid for the pumpkins we picked. The price was only 25 cents per pound of pumpkins.

When we thought that it was time to go back home, we gave second thoughts to all the activities to repeat one. Dear Son made it easy for us. He desired to go for the tractor-ride a second time. We went for another tractor-ride but did not get down in the pumpkin field this time.

There were many other activities in the festival including a train ride, pig-race, rope sliding, tarzan swing, corn maze, and target practice. We did not participate in all of them because Dear Son was not interested in some of these activities. Also, it is a large festival to enjoy everything in a few hours. We headed toward home. Dear Son was a bit sleepy in the car. We had a wonderful time. Bye bye La Union Maze for today. Bye bye pumpkin fest; see you next year.

28 thoughts on “Pumpkin smash in a pumpkin fest”