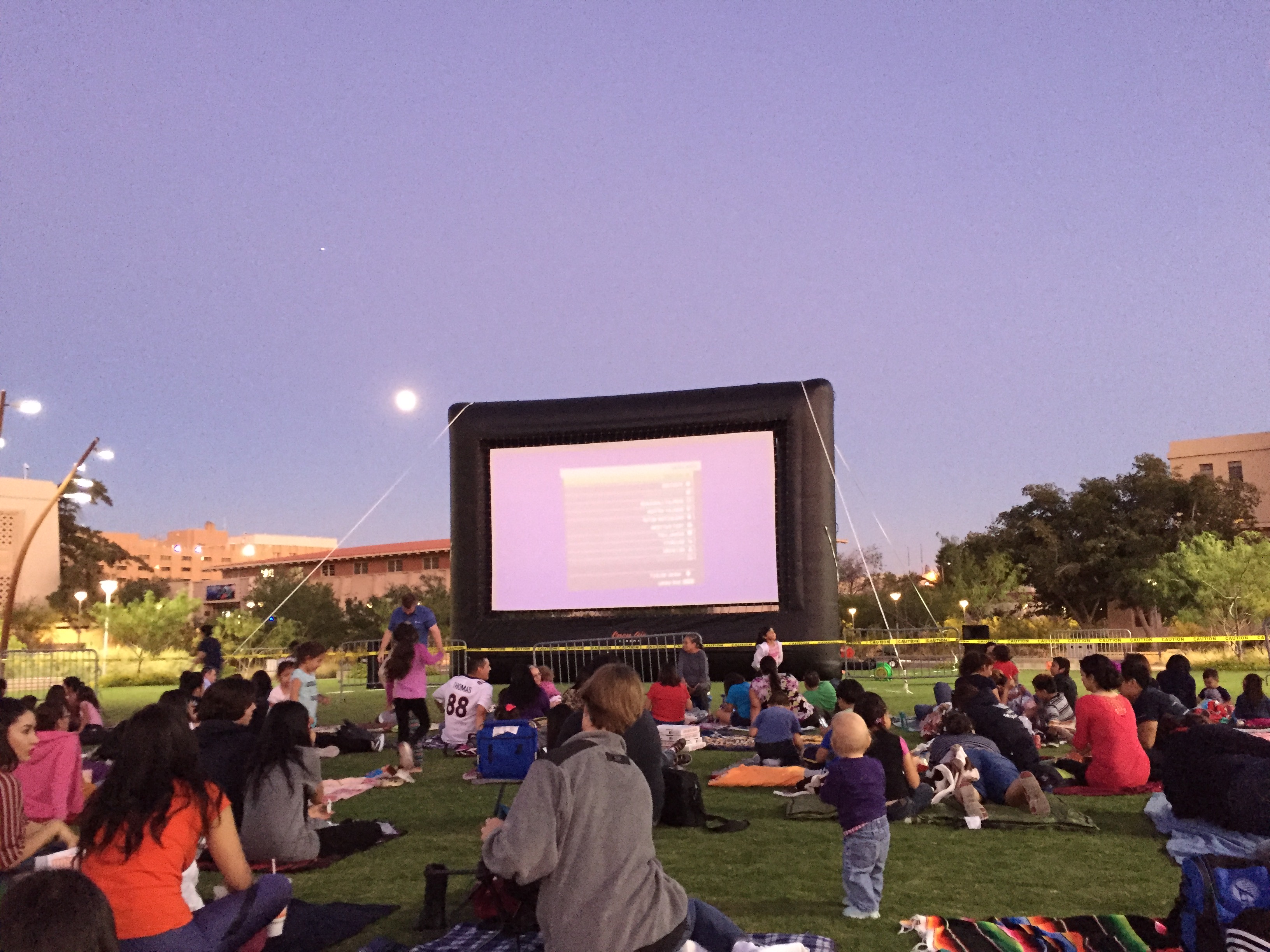 In one of our earlier posts, we mentioned that the University of Texas at El Paso (UTEP) has educational opportunities and activities for all. In addition, they arrange fun activities. We described one such event, Annual Splash ‘n’ Sparks, in another post a few months ago. Today’s post is going to be another local event that Miners arranged last evening (Friday, October 14, 2016). The name of the event was Movies on the Lawn. 🙂 The event was organized by the Office of Student Life at UTEP. There was no admission fee. Here is a picture from the event.

The event was open for all El Pasoans. The Finding Dory movie was projected on a large screen. The audience sat on the green grass of the Centennial Plaza at UTEP. Centennial Plaza is commonly called UTEP Centennial Park. Many people brought lawn chairs and blankets. We had our blankets with us. We reached the Centennial Plaza at 6:30PM. It was pretty amazing. 🙂 The place was quite full. Families came hours before the event, kids played around, parents relaxed, and everyone mingled.

There was music around. It was a festive environment. Tech people were setting up the projector. It was showing mirror image at first, as shown in the picture below. Once it was fixed, people clapped! Then we waited a few more minutes for the sunset.

The moon was already up. It was softly appearing on the upper left corner of the screen. We started watching the movie under the moon, sitting on green grass of the UTEP Centennial Plaza.

Ah … good time! What can be better than such a Friday evening.

Our four year old son was a bit upset because baby-Dory became grownup-Dory too fast. During the entire movie, dear son became excited when Dory had flash backs where baby-Dory appeared with her baby-voice. 🙂

The movie ended on time. Duh.. all movies do end. On our way back when dear son said, “I liked watching Dory”, we got the satisfaction of an evening well spent. However, we know that dear son did not watch much of the movie. Rather he spent most of the time watching people around, watching the airplanes flying, and the choppers roaming above.

Office of Student Life at UTEP has more movies scheduled for October this year. All these movies will be shown at UTEP Union Cinema. Information about these movies are available here: http://sa.utep.edu/osl/. If you are around, please bring your family and join the crowd. 🙂 UTEP Office of Student life’s Facebook page is: https://www.facebook.com/UTEPOSL. The Facebook page seems to be the easiest way to keep track of the upcoming events.

7 thoughts on “Movie night at UTEP”